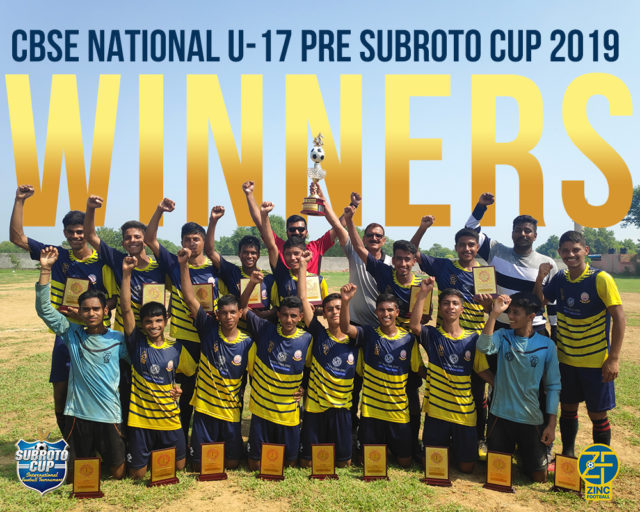 Zinc Football Academy, representing DAV HZL School (Zawar Mines), has created history as their Under-17 team claimed the Pre-Subroto Cup Nationals held at Bhunu, Haryana. Played among 15 best CBSE National schools, the team from Udaipur has grabbed the honours to represent CBSE in the Subroto Cup Internationals to be held at New Delhi from 7th September 2019.

Zinc Football Academy defeated host Vishvas NAV Sharda Public School 2-1 in the grand finale. However, the title did not come easy for the boys. The host took advantage of their home support to open the scoring in the first few minutes itself. However, striker Gaurav Meena equalised at the brink of halftime to even out the pressure. In an intense second half, Gaurav Meena managed to sneak past the defenders from a Aman Khan-through ball to score his and the team’s second goal and nudge the Academy boys ahead. Goalkeeper Ansai Goyari turned out to be hero of the match as he pulled off a stunning penalty save in the dying minutes of the game to deny the host a chance to equalise.

In the last four, Zinc Football Academy overcame the spirited SCR School from Gurugram, in what eventually turned out to be a one-sided affair.

Conducted by the Indian Air Force, with support from India’s Ministry of Youth Affairs & Sports, Subroto Cup Football Tournament is the most famous inter-school football tournament in India. Started in 1960, the tournament hosts preliminary inter-school tournaments in every state of India starting from Sub-division, District and Division level culminating in the inter-school finals at the national level. The school teams, winning the state inter-school championships are then invited to participate in the main Subroto Mukherjee Cup Tournament at Delhi.