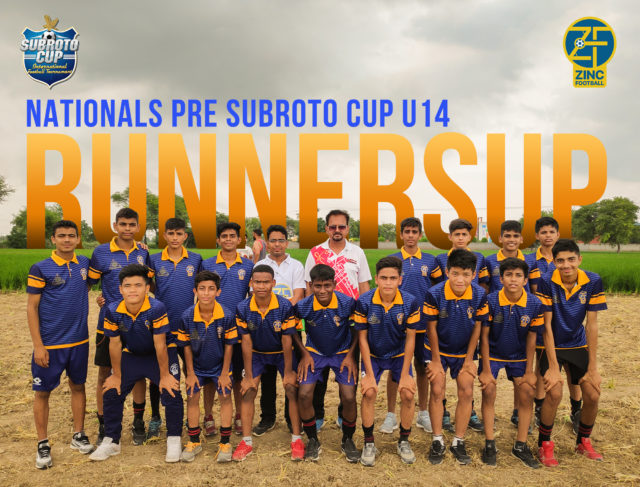 Last month our under-14 footballers from Zinc Football Academy earned the opportunity to compete in the Pre-Subroto Cup Nationals, the winner of which would qualify for Subroto Cup International Football Tournament 2019. Conducted by the Indian Air Force, with support from India’s Ministry of Youth Affairs & Sports, Subroto Cup Football Tournament is the most famous inter-school football tournament in India, started back in 1960.

Our Under-14 boys were in Bhuna (Haryana) to play the Nationals from 10th to 12th, wherein our young boys made it to the finals of the tournament comprising of the best CBSE teams but eventually lost to the host in the final.

So close yet so far!

Our boys played exceptionally well throughout, scoring 17 goals in 5 matches and conceding none till the finals. Placed in Group B, the Academy boys opened their campaign with a 8-0 win over Shah Satnam Ji School from Gurusarmoria, followed by a 6-0 victory against SMS Dutta Memorial PS from Uttarakhand. In the third and final group fixture, we overcame Saint Xavier School, Hisar, by a solitary goal. Another dominant performance in the semi-final saw the Academy boys secure a 2-0 victory over SCR School from Gurugram.

Jangminthang Haokip came out as the top scorer with 8 goals in 5 matches, including a hattrick in the tournament opener.

previous
The Captain
next
Zinc Football At Subroto Cup Internationals