The Under-17 footballers of Zinc Football Academy, all of whom are under the age of 16 years, had the opportunity to compete against the best in the business at the Subroto Cup International Football Tournament 2019 held from September 7 to 18 in New Delhi. A total of 44 teams from across the country along with international squads like Bangladesh (defending champions), Afghanistan, Nepal, Sri Lanka among others took part. 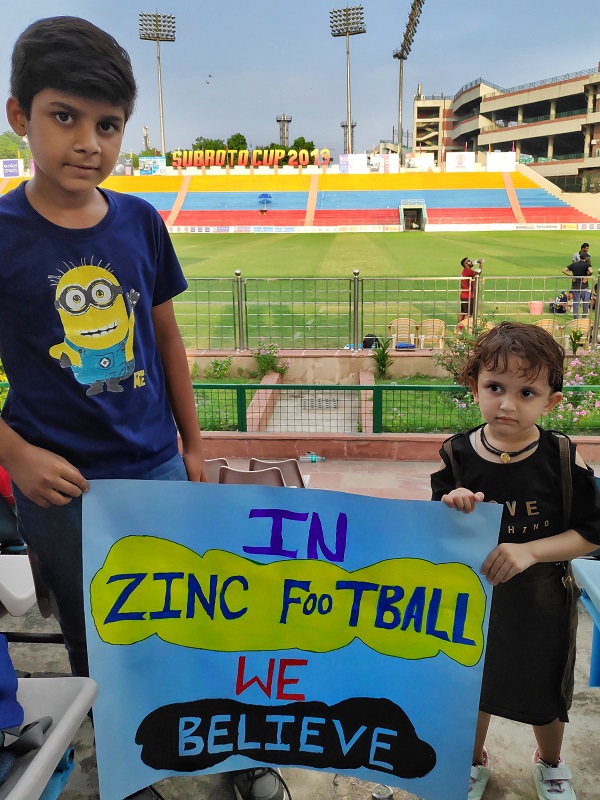 Pitted in a tough Group D with previous year’s runners-up Afghanistan and Indian heavyweights Chandigarh, Goa and Tamil Nadu, our boys knew it would be tough to go through as only one team from each of the eight groups would book a quarter-final spot. However, we were not ready to bow down without giving a fight.

The thirst and hunger to perform at an international level was exhibited in our very first match when we lost narrowly to Afghanistan. Although the scorecard shows 2-4, the match was a lot closer than the scoreline suggests and our boys were even leading at half-time 2-1. Disappointed, but our boys took pride as the Ambedkar Stadium stands filled with our supporters stood and appreciated our performance against such a tough opponent.

In the second match, our boys were at our best to defeat another footballing powerhouse Goa 2-0, whereas in the third, we managed to draw 1-1 against a physically strong Chandigarh. In the final group D match, Zinc Football boys showed their mettle to dominate Tamil Nadu and finish off their debut campaign with a 6-0 win and finish third in Group D, behind Afghanistan (who qualified for the next round) and Chandigarh.

It’s commendable that our boys wooed the crowd with their attractive play and spirited effort. This, hopefully, is just the beginning of a long journey and the future seems bright!